For kitchens that need a mixer for multiple applications, periodically mix heavy doughs and/or have limited batch use, Hobart offers its Centerline™ HMM20 standard heavy-duty mixer. 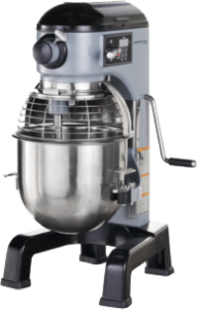 Not all mixing needs are the same. For some kitchens, making the investment in a maximum heavy-duty mixer not only isn’t feasible in terms of cost — but it also isn’t necessary. In many cases, the kitchen may not have heavy mixing jobs or need to mix continuously throughout the day.

With that in mind, Hobart has introduced its Centerline™ HMM20 standard heavy-duty mixer. This 20-quart mixer is designed for kitchens that need a mixer for multiple applications, periodically mix heavy doughs and/or have limited batch use. It is intended for mixing for less than four hours daily and is ideal for independent restaurants or other operations seeking a reliable, cost-effective mixer.

The Centerline HMM20 mixer features a clean, contemporary design with duo-tone finish and has an all-gear transmission that provides durable performance with less maintenance (compared to mixers with belts that can slip). It also offers three fixed speeds for consistent incorporating, blending and mixing of ingredients and has a 1/2 horsepower motor that provides all the power kitchens need for their jobs.

Hobart offers simple-to-use controls to make operating the mixer a user-friendly experience. The Centerline HMM20 mixer includes a last time remind feature that automatically recalls the last mixing time used, making it easier to mix multiple batches of the same recipe. A digital timer can be set to minutes and seconds for precise mixing and to prevent overmixing.

Adding to the mixer’s ease of use are an ergonomic bowl lift with an EZ Grip handle that allows the operator to move the bowl smoothly into mixing position, as well as a bowl guard that can be removed without tools for thorough cleaning and sanitation. The mixer’s smooth edges also make it simpler to clean by minimizing the areas where debris can accumulate.